Surfshark VPN Review 2021 – Cheap, but is it Good Enough? 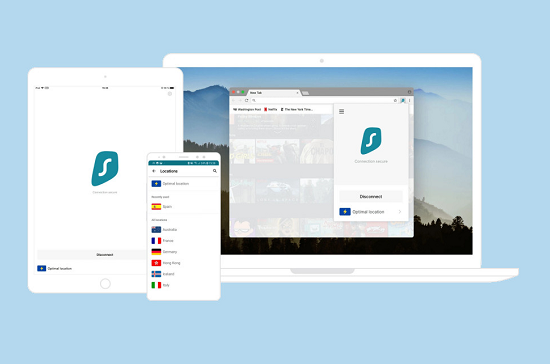 A new VPN provider surfaces among the big sharks of the VPN industry that provide a unique alluring user interface with good speeds and encryption; in this Surfshark VPN review we will explore “what the hype is all about?”.

This is a young VPN which gives a promising two-year pricing plan at a lower price and offers necessary essential protocols like IKEv2 and OpenVPN. The service provides 500+ servers in 50 countries which are useful in bypassing bandwidth limits. No matter where you are, you can connect unlimited devices on a single account.

Surfshark VPN offers a lot more which is exceptional considering other VPN providers. We decided to review and test the service and see if the service is worth your time and money.

Before you step into this Surfshark review, go through the feature-catalogue and find what it offers.

Surfshark offers three interesting pricing plans which cannot be overlooked. They include: 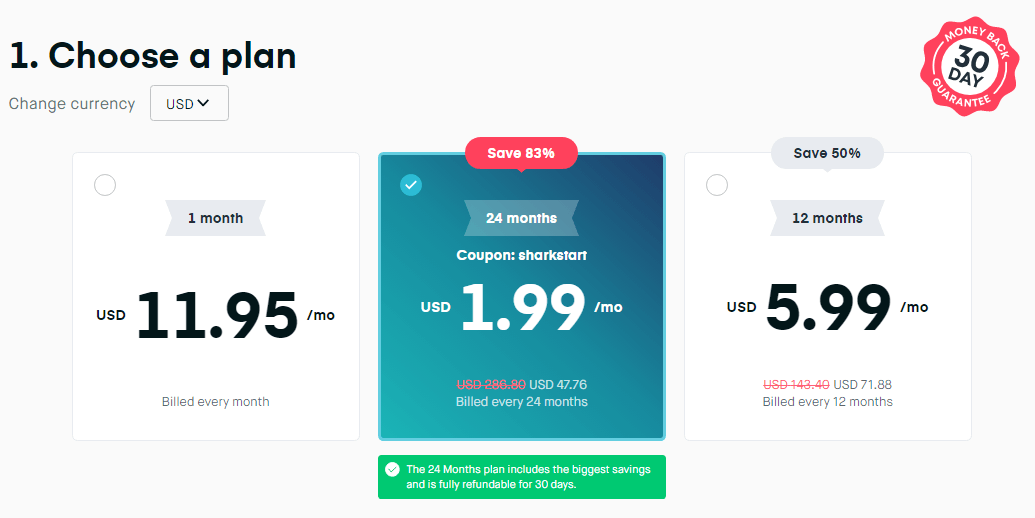 The VPN service offers mainstream pricing plans as mentioned above but what's not mainstream is the reduced prices which are not offered by its leading competitors. The monthly pricing plan is not recommended and if you want to avail the service, we would recommend opting for the 1-year and 2-year plan as it will cost you $5.99 and $1.99 monthly.

These two pricing plans are cheap to the pocket and you can easily manage more or less $3 monthly.

Surfshark also accepts payments from various payment method as they give leverage to users. Users who are keen on privacy and anonymity can use Cryptocurrencies while the rest and avail PayPal and other methods. It’s easy, flexible and amazing.

The same amount will be paid on all payment methods and you will find no difference in any. 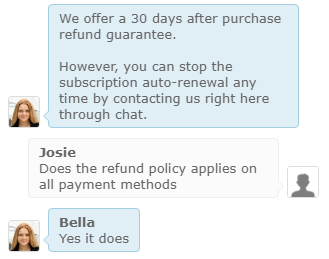 The provider offers a 30-day money-back guarantee which is remarkable as any unsatisfied customer can get their money back when requested without many questions asked. Usually refund policies are determined by the payment method used such as Bitcoins or discounts. The representative confirmed that the refund will be applicable on all payment methods which is impressive.

Jurisdiction Outside Mass Surveillance – A Plus Point

Having a safe jurisdiction is crucial because no matter how secure the privacy policy is, the VPN will be bound to follow the laws of that country by force. Surfshark VPN operates in the British Virgin Islands, which has no data retention laws. The good part is that the VPN operates outside of the “14 Eyes Alliance” which is a mutual collaboration of 14 countries sharing surveillance data on users.

This alliance has the authority to collect, spy and put surveillance on users and demand data as well from VPN providers. Gladly Surfshark operates outside 14 eyes which makes it safe and protected.

Kill Switch is offered to help secure online traffic in case the VPN connection drops. When this happens your identity becomes visible, but through a Kill Switch, your connection remains hidden and secure.

The VPN packs secure DNS protection that uses an IPv4 stack that keeps DNS safe. It has no loopholes and cracks that would leak and compromise IP. It remains a private VPN service without hindering security.

After Surfshark login users can avail maximum security through using VPN over Tor. This takes security one step further allowing double encryption. You can use both the services separate as well, but using them in conjunction would do wonders.

MultiHop is an excellent addition as it allows users to connect two servers simultaneously that increases the encryption level and your online traffic routes through one server to the next before reaching its final destination. This way your online traffic and identity would be super-anonymous.

Download Surfshark VPN, and you will get industry standard protocols which are the finest encryptions that are required. The VPN doesn't offer PPTP and L2TP because these protocols are obsolete and do not provide the same encryption and safety. The protocols offered are:

Among these two, OpenVPN is the best protocol so far as it has the ability to switch between UDP and TCP. While IKEv2 provides flexible connection and easy network switching that removes geo-blocks. Compared to OpenVPN, this protocol is slightly slow but combine both of them and get unbelievable protection.

Users are provided the accessibility to switch between the two in the ‘Settings’ section as both of them can be run individually.

Note: Connecting to a VPN would slightly decrease your internet connection as with more encryption the speed deteriorates. However, this is not the case with a premium VPN. Your connection speed decreases but not extensively. In our Surfshark review, we experienced good speeds considering our connection without one.

Our base speed before connecting the VPN was:

We connected to three regions and tested the following speeds.

The US server reduced to nearly half the speed than which isn’t that bad.

The download speed is exceptional as it did not change much and the upload was satisfying as well.

We would not recommend the Hong Kong server as the speed lagged a lot and decreased to the lowest.

The speed was not consistent, and each time we tested and recorded different speeds in the same region. We can say the speed is fast but VPN does not maintain that speed and it lags due to unknown reasons. The location of the server may play a huge part as you should always connect to the nearest server from your location.

Surfshark being a new VPN offers 800+ servers in 50+ locations which is a good bargain considering its features, consistency and usability. Detail of the servers is not mentioned on the website but they claim to provide P2P supported servers.

Their P2P support page claims that it provides P2P fast speeds on four servers. These servers are: 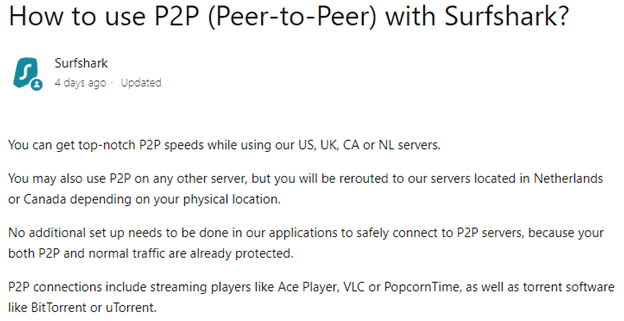 Among the 800+ servers, providing P2P support on just four servers is quite less considering other VPN providers that offer thousands of servers, all supported by peer-to-peer sharing. But Surfshark provides unlimited bandwidth which makes it ideal as you don’t have a data usage limit.

Users can enjoy unlimited and uninterrupted access to any site at any time.

While reviewing the VPN, we had to ensure that it unblocks major streaming websites like Netflix and Hulu. We tested a few servers mentioned below and all of them work with Netflix USA.

Surfshark provides a big list of devices and operating system compatible which is recommendable. Users can download the app on any device of their choice without much hassle. The devices Include:

Every device has a separate page allotted which provides details of the security, usability and performance of the app. Also, for Android, there’s an APK file as well if the app is not downloading on your device.

Having these extensions makes it easy to secure your browser without leaving the tab.

Surfshark claims not to log any user data and information which is a false statement as we went through the Log Policy while conducting Surfshark review. The VPN provider collects a minimal amount of data which is alarming as well.

For someone who isn't worried about their privacy should not be alarmed but anyone using a VPN should be worried as a VPN provider should not collect log data at any cost as the purpose of the VPN becomes faulty and flawed. Their log policy states they collect:

Surfshark Customer support has it all. They provide every accessibility for the user. The live chat requires an email, and you can start the conversation. You will receive a reply within a minute which is fast.

While reviewing Surfshark, we were satisfied with the customer support as we were advised and recommended technical assistance.

After reviewing Surfshark, we have taken a breath of relief as this VPN provider has brought a smile on our face and a thumbs up on our reviewing scale. Yes, we do recommend Surfshark. It is a complete package of security, privacy, features with reasonable speed. Being a  new VPN, they provide live chat support and a reasonable pricing plan that is highly valued and respected. 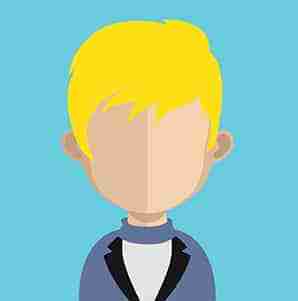 One thought on “Surfshark VPN Review 2021 – Cheap, but is it Good Enough?”

With more than two decades of planning, organising and then executing digital marketing strategies for my clients has meant an extensive use of digital marketing products and services. With this experience my team and i are writing these articles to help spread awareness and educate readers about digital platforms and services in the market today. We try all the products and services we review and we vouch for all the solutions we recommend. To help finance the writing of our content we sometimes include affiliate  links in our posts which means that if you purchase a product after clicking on one of our links to it, we may receive commission from the software company. (not from you.) We have not been given any free products, services or anything else in exchange for mentioning them. Importantly we certainly don’t let the size of the affiliate commission effect any recommendation.